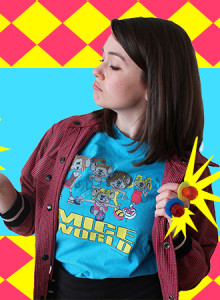 Taryn writes for HelloGiggles.com. One time Reese Witherspoon favorited one of her tweets. Taryn spent most of the ’90s trying to convince people that she was either the Yellow Ranger, Sporty Spice, or Mufasa. That last one seemed to make sense at the time.

Favorite ’90s Memory: “Doing the Macarena on rollerblades with my best friend for our school talent show. Scrunchies, bodysuits, and rainbow skirts were involved. Oh – and our Macarena track was on a cassette tape!”