“All that and a bag of chips!”  -NOW Magazine

“A perfect throwback!”  -Mooney on Theatre

“A trip down memory lane.”  -The Scope at Ryerson 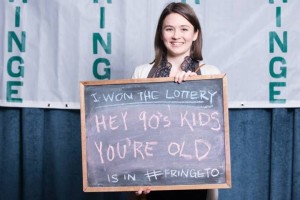 Hey ’90s Kids, You’re Old is a sketch comedy nostalgia show that’s set in the present, but stuck in the past. What if the Midnight Society still told stories? What if you started using your CD Player again? Where is Waldo, anyways? Hey ’90s Kids You’re Old will bring you back to yesteryear, but will also examine what it means to be a ’90s kid in a post ’90s world.

Written & directed by Taryn Parrish, the show ran from July 2-13, 2014 as part of the 2014 Toronto Fringe Festival at St. Vladimir’s Theatre. Hey ’90s Kids, You’re Old then made its American debut as part of New York City’s FRIGID Festival from February 20th – March 1st, 2015. The show has since had successful runs at Winnipeg Fringe (July 2015) and Chicago Fringe (September 2015). Next stop for Hey ’90s Kids is Edmonton Fringe in August 2016!

This sketch comedy show features a number of familiar ’90s characters and products in modern day situations, including Pinky and the Brain, Are you Afraid of the Dark‘s Midnight Society, Waldo, S Club 7, and many more that will test your ’90s IQ.

Hey ’90s Kids, You’re Old also seamlessly weaves in the story of Brad, a ’90s kid, and his new girlfriend Carrie, a ’90s baby, as he is confronted by his inability to let go of the past and embrace the new millennium.