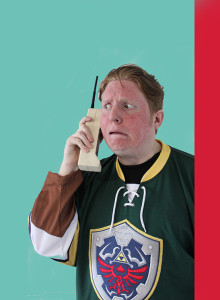 Paul J. Piekoszewski is an award-winning actor, writer, producer, and comic from Amsterdam. With his theatre company Morning Person Theatre, he has written and starred in Knife 2: The Re-Slashening, Knife 3: Summer of Blood, and Night Rangers – he also wrote and directed The Triangle at the 2016 Ottawa Fringe Festival. His other roles include critically acclaimed performances in Peter Weiss’s Marat/Sade, Stephen Adly Guirgis’s The Last Days of Judas Iscariot, Eugene Ionesco’s The Bald Soprano. He is also the producer and host of Thursday Night Fan Fiction, a monthly event celebrating the best and silliest erotic fan fiction on the internet. His 11 years of improv comedy experience covers time with Ottawa’s Outtake Improv, as well as performances with Colin Mochrie, Patrick McKenna, and Mary Walsh.

Favourite ’90s Moment: “How about literally every episode of Are You Afraid of the Dark? Special shout out to ‘The Tale of the Dead Man’s Float’ – that one still scares the pants off me.”