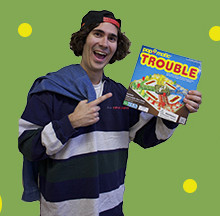 Marc Hallworth is an actor, comedian, writer, director, teacher, and improvisor from Calgary, Alberta. After doing years of theatre and independent film projects, he began doing stand-up and improv in Calgary in 2006. He moved to Toronto in 2009 for the Humber College “Comedy: Writing & Performance” program, performing at Yuk Yuk’s, the Rivoli, the Comedy Bar, the Second City, the NXNE and YYComedy Festivals, and was a semi-finalist in the 2013 Toronto Comedy Brawl.

Upon graduating, he won the Billy Crystal Sketch Award and the Mark Steven’s Independent Producing Award. He is an improv tournament champion at both the Toronto Beerprov Draft and TheatreSports Micetro, and helped produce and perform at the first ever Calgary Improv Festival. He’s appeared in the Canadian film The Cocksure Lads and the revue Hey ’90s Kids, You’re Old at the New York Frigid Festival. Marc currently produces three comedy shows, Siren’s Comedy, Drop & Give Me 20, and The Vest Show in Town with his sketch troupe Vest of Friends, winners of the Runner-Up Best-of-the-Fest Award at the 2014 Montreal SketchFest, the Producer’s Pick Award at the 2011 Toronto SketchFest, the Grinder Award at the 2013 Montreal SketchFest, and the Producer’s Pick Award at the 2013 Columbus Brew-ha-ha. They have also performed as part of Fresh Meat 2011, two showcases for Just For Laughs, and were named one of Bite.ca’s “10 Canadian Sketch Troupes You Need To See Right Now.”